A lwen Water Treatment Works is situated approximately 20km north-west of the town of Corwen, Denbighshire, North Wales. From this works, Dŵr Cymru Welsh Water supplies households and business customers in Denbighshire and Flintshire and combined with water from its Bretton WTW, also supplies customers in the lower Dee Valley. Following a bacteriological contamination in 2009 that resulted in a Boil Water Notice being issued, Welsh Water made commitments to the Drinking Water Inspectorate (DWI) to improve the performance of the Alwen WTW. Welsh Water allocated in excess of £14m to improve the disinfection processes and the aluminium removal performance. Black & Veatch, as a main AMP5 process partner to Welsh Water, undertook the design, construction and commissioning of the improvements over a period from May 2009 to March of 2012. 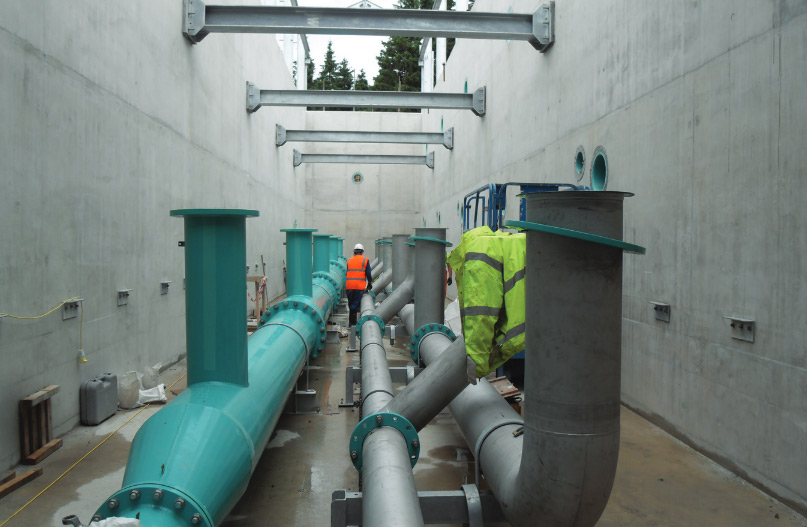 Existing works
The current works was constructed in 1993 and consisted of coagulation, dissolved air floatation, primary and secondary filtration using Enelco style filters , chloramination and disinfection. Welsh Water gave the DWI an undertaking to provide an interim improvement to disinfection by July 2010 and final improvements to maximise disinfection performance by end of August 2011.
Preferred option
The improvements to the disinfection process were agreed to be undertaken in two phases, allowing the new rapid gravity filtration (RGF) structure to be built between these phases. Once the new RGFs were built, the existing filtration processes could be modified and the newly redundant secondary filters could be converted to contact tanks, which would add the required volume to the existing disinfection process.
Design
Once the initial process selections had been made, the main design issues were around hydraulics and integrating the construction of the new processes with the existing processes to minimise disruption during the construction and commissioning. The new RGF process had to fit between the existing DAF plant and filtration plant. The hydraulics between these existing processes meant that interstage pumping could not be avoided. This pumping stage was installed on the outlet of the new RGF process to pump filtered water up to the existing filtration building.
The new RGF process had to be built and commissioned before Welsh Water could give access to Black & Veatch to start the conversion works to the existing filtration processes. Many design hours were spent with Welsh Water operations to fully understand the limitations on existing processes so that the impact due to the construction and commissioning of the new elements of the works were minimal to Welsh Water ongoing operation.

All information on this page is published and owned by www.waterprojectsonline.co.uk and is used with courtesy. All images used on this page Courtesy of Dŵr Cymru Welsh Water.